By Tom Stafford, University of Sheffield

The International Institute for Applied Systems Analysis: Gender disparities in cognition will not diminish

The Economist: A variation in the cognitive abilities of the two sexes may be more about social development than gender stereotypes

Everybody has an opinion on men, women and the difference (or not) between them. Now a new study has used a massive and long-running European survey to investigate how differences in cognitive ability are changing. This is super smart, because it offers us an escape from arguing about whether men and women are different in how they think, allowing us some insight into how any such differences might develop.

What they Actually Did

Researchers led by Daniela Weber at Austria’s International Institute for Applied Systems Analysis analysed data collected as part of the European Survey of Health, Ageing and Retirement. This includes data analysed in this study from approximately 31,000 adults, men and women all aged older than 50. As well as answering demographic questions, the survey participants took short quizzes which tested their memory, numeracy and verbal fluency (this last item involved a classic test which asks people to name as many animals as they could in 60 seconds). Alongside each test score, we have the year the participant was born in, as well as measures of gender equality and economic development for the country where they grew up. 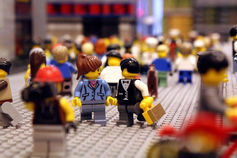 Why do you always forget to buy milk? Sunfox, CC BY-NC-SA

What varied for the three abilities was in the researchers’ predictions for the situation where men and women spent an equal amount of time in education: for memory this scenario was associated with a distinct female advantage, for numeracy a male advantage and for verbal fluency, there was no difference.

The thing that dogs studies on gender differences in cognition is the question of why these differences exist. People have such strong expectations, that they often leap to the assumption that any observed difference must reflect something fundamental about men vs women. Here, consider the example of the Australian newspaper which headlined their take on this story as telling us something about “male and female brains”, the implication being that the unequalness was a fundamental, biological, difference. In fact, research often shows that gender differences in cognitive performance are small, and even then we don’t know why these differences exist.

The great thing about this study is that by looking at how gender differences evolve over time it promises insight into what drives those difference in the first place. The fact that the female memory advantage increases as women are allowed more access to education is, on the face of it, suggestive evidence that at least one cognitive difference between men and women may be unleashed by more equal societies, rather than removed by them.

The most important thing to take from this research is – as the authors report – increasing gender equality disproportionately benefits women. This is because – no surprise! – gender inequality disproportionately disadvantages women. Even in the area of cognitive performance, this historical denial of opportunities, health and education to women means, at a population level, they have more potential to increase their scores on these tests.

Along with other research on things like IQ, this study found systemmatic improvements in cognitive performance across time for both men and women – as everyone’s opportunities and health increases, so does their cognitive function.

But the provocative suggestion of this study is that as societies develop we won’t necessarily see all gender differences go away. Some cognitive differences may actually increase when women are at less of a disadvantage.

You don’t leap to conclusions based on one study, but this is a neat contribution. One caveat is that even though indices such as “years in education” show diminished gender inequality in Europe, you’d be a fool to think that societies which educated men and women for an equal number of years treated them both equally and put equal expectations on them.

Even if you thought this was true for 2014, you wouldn’t think this was true for European societies of the 1950s (when the youngest of these study participants were growing up). There could be very strong societal influences on cognitive ability – such as expecting women to be good with words and bad with numbers – that simply aren’t captured by the data analysed here.

Personally, I find it interesting to observe how keen people are to seize on such evidence that “essential” gender differences definitely do exist (despite the known confounds of living in a sexist society). My preferred strategy would be to hold judgement and focus on the remaking the definitely sexist society. For certain, we’ll only get the truth when we have an account of how cognitive abilities develop within both biological and social contexts. Studies like this point the way, and suggest that whatever the truth is, it should have some surprises for everyone.

The original research: The changing face of cognitive gender differences in Europe

My previous column on gender differences: Are men better wired to read maps or is it a tired cliché?