Cystic fibrosis was a disease that has been around since the Middle Ages. Many infants with “salty skin” often died in infancy or young. These babies and children were considered “bewitched” because they died at such an early age.

The Swiss pediatrician Guido Fanconi first named the disease in 1936, when he refers to it as cystic fibrosis with Bronchiectasis. A scientist from Columbia University first developed a complete profile and description of cystic fibrosis symptoms.

A profile published in 1938 by Dr. Dorothy Hansine Andersen (pictured in photo) described the characteristic cystic fibrosis of the pancreas, correlating it with the lung and intestinal disease prominent in CF, but this was not yet much help with treatment. It was finally discovered in 1949, also by Dr. Anderson, that cystic fibrosis was caused by a recessive mutant gene. Diagnosed then as a genetic disease improvements are being made each year in treatments for this incurable disease.

Today, strides are being made in treatment and early diagnosis of cystic fibrosis but there is still no known cure for the disease. The basic problem with the disease of cystic fibrosis is the same in all patients. The abnormality in the number seven chromosomes affects the glands that produce sweat and mucus. Our bodies need sweat to keep cool but the mutant gene causes excessive loss of salt in the sweat.

Mucus is good to have too because it lines important organs in our body keeping them from drying out. Cystic fibrosis causes the patients mucus to become excessively heavy, discolored, and sticky. Mucus sticks to the lining and allows germs, bacteria, and infections to linger and cause severe infections.

Cystic fibrosis normally affects the digestive and respiratory system but is known to affect other organs also. CF causes liver problems, digestive disorders, and can even lead to osteoporosis and bone loss. If a person loses a great deal of salt in their sweat, it can cause abnormal heart rhythms and shock. When the digestive organs are affected, the patient does not process food as they should and the body does not receive enough of the vital nutrients it needs.

Patients with cystic fibrosis should take steps to maintain good health including eating healthy foods, staying active, and avoiding smoking or being in a smoky place. Cystic fibrosis patients already have problems with breathing and smoking further complicates an already incurable disease. Staying active will help keep the thick mucus loosened so it can be expelled from the body. Patients may also want to take supplements because the digestive system has problems digesting foods. 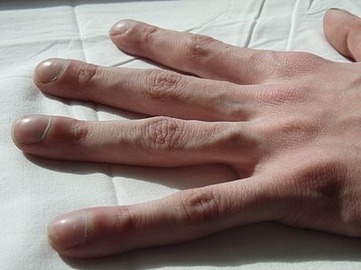 Wikipedia: Cystic fibrosis (CF), also known as mucoviscidosis, is an autosomal recessive genetic disorder that affects most critically the lungs, and also the pancreas, liver, and intestine. →